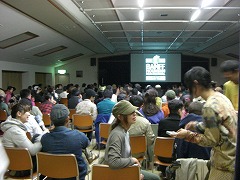 BANFF Mountain Film Festival (BANFF MMF) World Tour came to Norikura Plateau, Nagano last Saturday, September 12th. I went there as a volunteer staff member.
You might not know what BANFF MMF is. It is the world-renowned outdoor short film contest held in Banff, Canada. After Banff, the world tour starts and about 200,000 people watch the films about mountain, nature, adventure, and environment in the world.
Unfortunately, heavy rain poured at Norikura on that day, so the screening was held inside (last year, it was held outdoors, under beautiful stars and Milky Way!). However, more than 200 people gathered at Norikura Tourist Center.

The films were cool, exciting, and interesting.
In Japan, outdoor sports are now gaining popularity among young people, so, most of the audience were hip young outdoor lovers.
In some scenes, like when a rock climber succeeded in climbing a really difficult rock wall after many failed attempts, the audience clapped together. I enjoyed the atmosphere as well as the films.
BANFF MMF will be held also in downtown Matsumoto (Nagano-ken Matsumoto Bunka Kaikan) on October 11th.
The tour will visit major cities in Japan. Because Matsumoto is a mecca for outdoor sports in Japan, it comes to Matsumoto twice this year.