On Saturday August 18th, the summer Sumo road-show hit town, performing for a very enthusiastic and appreciative crowd. And perform they certainly did.
I’m not a Sumo fanatic – I enjoy it if it’s on the box. Recently though, I’ve not kept up with the younger wrestlers, so I’m afraid I can’t give you a who’s who of participants. There were plenty of them – and I wondered how they get around the country? After all, up close & personal these guys are impressively big. Not obese, and not lumbering hulks by any stretch of the imagination. I was really impressed with how light on their feet these men were; for their size surprisingly nimble & gentle, softly spoken and amazingly patient.
They were pestered for autographs on their way into & out of the showers in their underwear (fashion highlights included a Pikachu towel & “Big Dogs” boxers); and any other moment they were in view – which was pretty much the whole day. Several took time out to chat with fans & pose for photos, towering over kids and older fans alike.
Asked for an interview, they politely declined. Not media shy, just ‘on message’, and good for them! (Anyway, what do you ask an enormous Sumo dude?! “How was lunch?”)
The show proper was a relatively light-hearted affair, with these Japanese Treasures showing off their repertoire of singing skills (really!), obvious sense of humour and respect for their peers. These guys look after each other in a very fraternal no nonsense manner. Even the slapstick bout was non-violently physical. 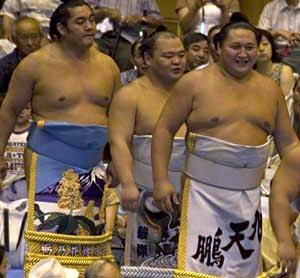 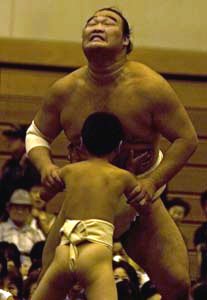 A star-struck group of young wrestlers-to-be took turns grappling with the professionals on the Dohhyo, with varying degrees of success but a lot of bottle. Tiddlers tackled massive legs, bounced off bellies, found themselves airborne by the belt and still ploughed in for more. I noticed more than one Rikishi taking a moment to clean kids off after they took a dusting & offer a gentle word of encouragement with a smile, which must have made the kids’ day.
Yes there was some serious wrestling, and although a training outing really, the wallops these blokes hit each other with from the tachiai were not for the faint-hearted. Asashoryu was not missed, banned as he is for wearing a Wayne Rooney shirt; ironic he is also injured now.
The crowd went home very happy indeed; I left impressed with a new feeling of respect for these gentle giants. They really are professional sportsmen.
http://www.flickr.com/photos/saint_george/sets/72157601546733055/ for more images.