Last home game of the season saw a healthy & boisterous crowd of nearly 6,000 sweat on a two goal half-time lead. A lot of the crowd missed the opening goal in the fourth minute (45 minute walk from Murai station, car park miles away anyone?) when a sweeping move from the right put Takazawa in behind the last man & his shot beat the keeper. High fives everywhere, as news also rippled around the ground that Nagano beat the spoiled kids at Japan S.C. 2-1 in the morning kick-off.
Our boys have a habit of sitting on a lead, but surely not 86 minutes-worth? A comedy of errors saw Shirao virtually walk the second in; a clearing hoof up the park suckered Kanazawa’s keeper out of his area. An almost Scottish flailing of limbs as the ball ballooned over his head, ball plopped to feet of our number 10…who took far too long getting it into the net.
Zweigen’s no.26 (affectionately known as “useless baldy”) attracted the Ultras attention, since last year he wore a Yamaga shirt. He also attracted the ref’s attention with a pointless yellow card, and did a fair impression of George Gregan for the rest of the game, offering the ref advice & generally not being in the right place much. 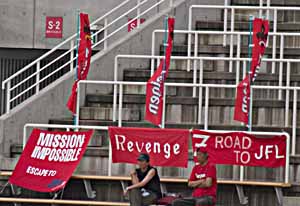 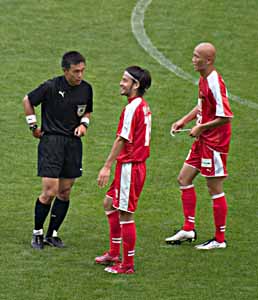 A cracking waist-high volley saw Kanazawa get back in the game in the second half, with Yamaga’s midfield failing to pick up runners through the middle. The green men looked like they were going to be trampled, suddenly unable to hang on to the ball, and gifting the visitor’s far too much possession, especially down the right. 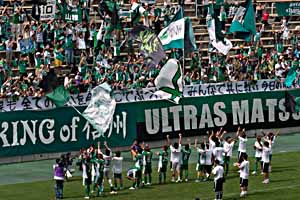 Hang on they did though; Kanazawa losing momentum with two yellow cards for chatting up the ref (and the coach being sent to the stands) – the fourth official incidentally had a splendid game. And the final whistle meant destiny now firmly in the hands of the ‘Gans. I’m going to ask a mate of mine to explain the “what next” scenario as I don’t understand at all! Last match of the season away to Japan S.C. in Niigata, July 22nd. Anyone give me a lift?