Born and raised in Matsumoto, Yayoi Kusama struggled with hallucinations from the time she was a young child. It was these visions that would inspire her art and propel her into becoming one of the most intriguing contemporary and avant-garde artists in the world. Experience the origins of this great artist by visiting Matsumoto and the Matsumoto Museum of Art. 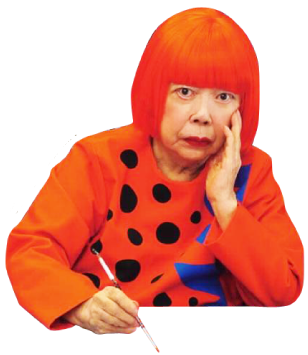 Kusama began suffering from hallucinations at a very young age, but through art she found relief. Even at age 10, you can already begin to see the effect it had on her art in one of her earliest drawings in which she sketched her mother dressed in a kimono. Both the image of her mother and the background are covered in numerous polka dots, which is now one of the most characteristic patterns that appear in her work.

Though she found relief through art, her family, especially her mother, was opposed to the idea of her becoming an artist. Not only was her mother unsupportive of Kusama’s artistic aspirations, she was also abusive and after graduating high school, Kusama went to Kyoto to study Nihonga (Japanese-style painting) as well as escape the situation at home. However, her frustration with the old and rigid style and Japan’s view of women at that time drove her to move to the United States.

Yayoi Kusama moved to the U.S. when she was 27, first spending one year in Seattle before moving to New York City. She had been corresponding and received mentoring from Georgia O’Keefe, and in New York, she busted into the avant-garde movement as well as the 60s hippies scene and produced an impressive variety of works, including large paintings, soft sculptures in which she covered everyday objects with strange protrusions, artistic film, avant-garde fashion, and even environmental sculptures using mirrors and lights.

Though for the most part, she barely made a living through her art, her humongous and obsessively intricate series of paintings, “Infinity Nets,” began to turn heads. She became friends with famous artists such as Donald Judd and Andy Warhol and had a platonic relationship with Joseph Cornell.

At frontier of the pop art, minimalist, feminist, and other artistic movements, Kusama’s fame began to rival her fellow artists, but it unfortunately did not save her from the buildup of work exhaustion (sometimes she would paint for days without eating!) and lack of funds. The death of Joseph Cornell was a triple blow. In 1973, in ill health, she decided to move back to Japan.

Upon returning to Japan in 1973, Kusama struggled to find galleries that would exhibit her works, as they were considered to provocative for Japan. She continued to fight with mental illness and was checked into a mental hospital which she still lives in to this day. These setbacks did not stop her, however. She continued to produce art in a studio she rented near the hospital and began to write novels and other literary works.

After being invited to the Venice Biennale in 1993 where she exhibited her “Infinity Mirror Rooms” filled with infinitely repeating spotted pumpkins, her fame began to sky rocket. The following year she produced one of her most famous open-air sculptures, “Pumpkin,” a gigantic, yellow pumpkin painted with a mesmerizing pattern of black dots. “Pumpkin” sits on Naoshima Island in Japan and Kusama has described it as her alter ego.

Dots continued to permeate Kusama’s work and her art took on brighter colors. The same spots that had once threatened to obliterate her had, as Kusama says, saved her life through their manifestation in her work.

In her most recent project starting in 2009, she has continued to produce hundreds of paintings at an alarming rate in a series called “My Eternal Soul” with each painting titled almost as if they were entries in a diary.

Kusama has received numerous honors, including the Order of the Rising Sun’s Lifetime Achievement Award, Person of Cultural Merit Award, and the Ordre des Arts et des Lettres. She was also the first Japanese woman to receive the Praemium Imperaile presented by the Imperial Family of Japan.

In 2017, she opened the Yayoi Kusama Museum in Tokyo dedicated to her work. 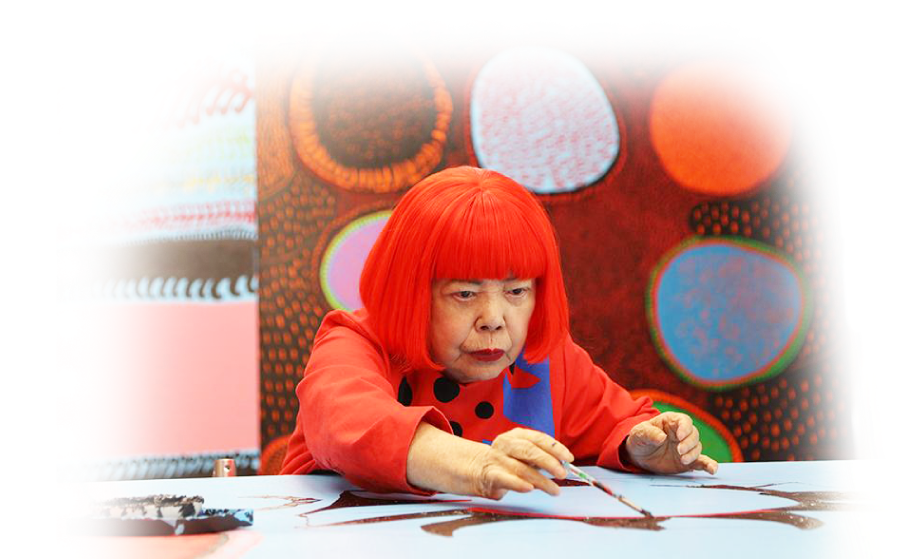